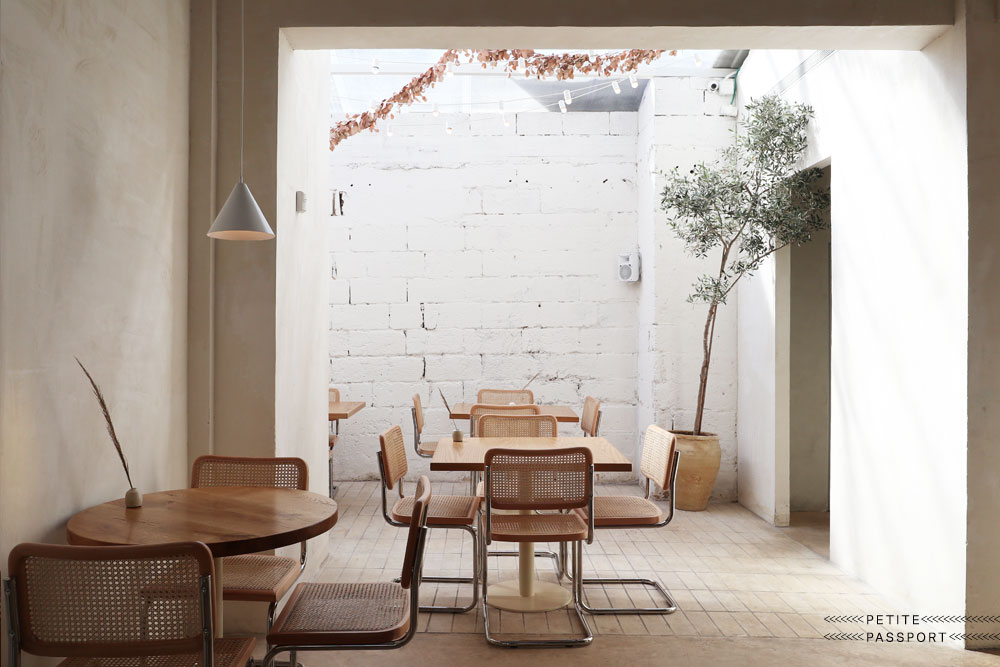 In September Opa opened its doors in Tel Aviv. A plant-based restaurant by female chef Shirel Berger with a beautifully designed minimalistic interior.

Opa is located close to Levinsky Market, a market where both locals and tourists gather to try the rich variety of herbs, vegetables, fruit, and other food. In the street where Opa is located, shops are used as storage boxes for the market vendors, and there’s not much to see. I’m about to start doubting if I’m in the right street when I see a clean, white façade, which almost looks like an art gallery, with the name of the restaurant on it. Here we are!

Inside I meet designers Emma and Ofer Shahar from Craft & Bloom and Vered Kadouri. Chef Shirel Berger worked at Miss Kaplin (now closed) and when Emma and Ofer went there for dinner, they loved what she was making. Her plant-based dishes were so good! So when they threw a party a few months later, they asked her to cook. Shirel told them it was her dream to open her own restaurant one day. A few months later she called: ‘I’m going to do it now. Do you want to work on the interior?’ In Tinder terms: they’ve got a match!

Emma and Vered tell me that Shirel was a dream client as she let the designers go their own way. It was quite a job because the space consisted of two dark, storage places, which had to be converted into an excellent working kitchen and restaurant. They chose for an open kitchen so the guests can sit at the bar and see the chef prepare their dishes. Also, there are separate tables in the restaurant, and there is a beautiful patio from where the light enters the restaurant.

The interior is serene and minimalistic. A conscious choice as they wanted to put the often colorful dishes in the spotlight. As they say: ‘over-styling, much like over-spicing, is only necessary when the bare ingredients are in need of clever disguise. In the case of Opa, every element shines in its simplicity’. The chairs are inspired by those of Bauhaus designer Marcel Breuer, the lamps were made especially for the restaurant by a local craftsman from the flea market of Jaffa. And the ceramics are made by both Merav Waldman and Outwandering Ceramics.

At 7 pm I have a reservation at the restaurant so I can try their delicious food.  The menu consists of seven dishes, all plant-based. The idea is to order three dishes per person: you can always order extra afterward. The dishes are all named after the main ingredient. I’m going for Pear, Fennel, and Red Cabbage. The first is my favorite: a delicious fresh dish with pear, chervil, pear vinegar, and green garlic.

And if you are wondering what the name of the restaurant stands for? Opa is named after the chef’s grandfather. The man who opened Los Angeles’ first gourmet burger restaurant and passed on his love of food to his daughters.

The vegan capital of the world

The vegan capital of the world