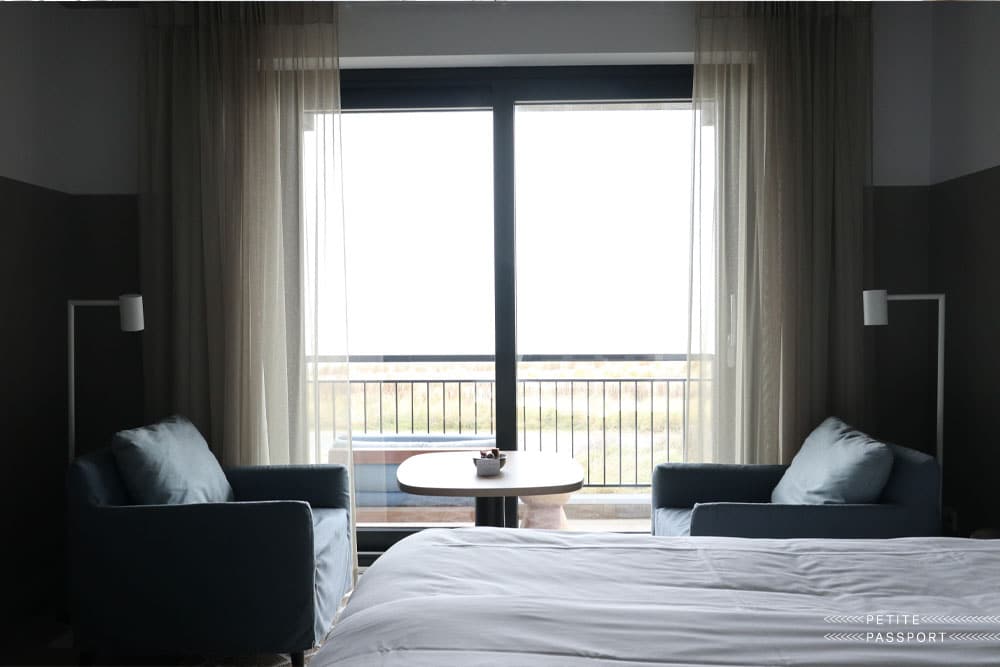 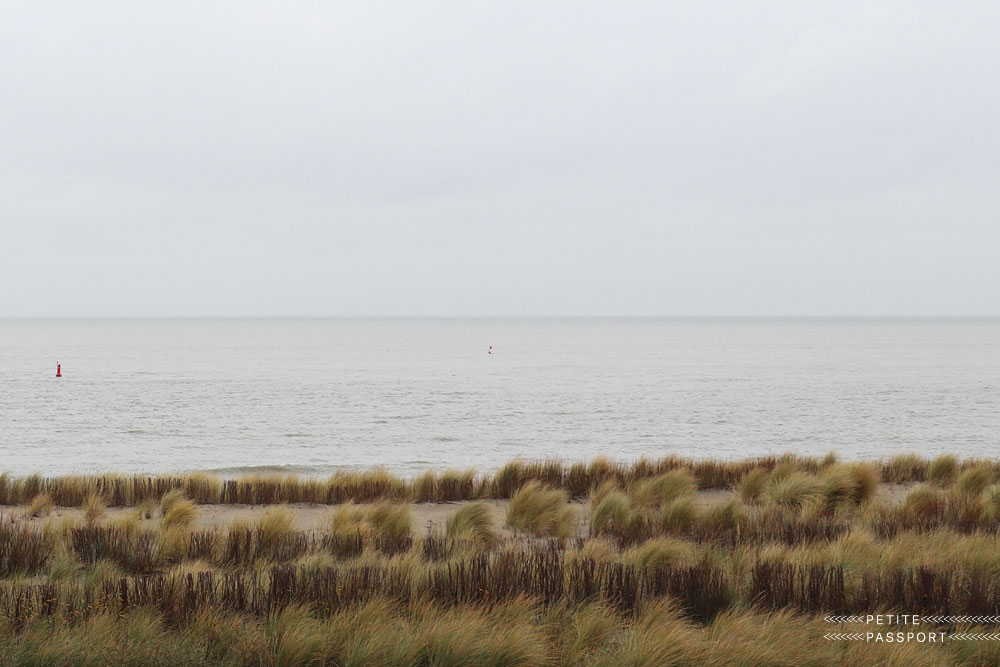 Cadzand is a seaside town, situated in the most south-western corner of the Netherlands, at only a ten minutes’ drive from Knokke in Belgium. This is where Chef Sergio Herman grew up, and the launch of Blueness now gives him four restaurants in this charming town, all located in and around the Strandhotel. I booked a stay here – and in these twenty-four hours, I tasted the most delicious dishes ever.

December is the quietest time of the year in Cadzand. Luxury apartments are being built along the coastline. It’s stormy and raining, but this does not detract from the beauty of the beach. The Strandhotel has been in the Gorthmanns family for generations, and they decided to give the hotel an upgrade. They realized this by placing the food and beverages in the hands of Sergio Herman and contracting Piet Boon to take on the hotel’s interior.

The rooms by Piet Boon

When you enter the lobby, you don’t yet feel the connection with the beach, but this changes immediately as soon as you enter your room. The sliding doors open up to the sea – there are only a walking trail and a few dunes between you and the beach. Lying in your bed, you hear the murmur of the sea and you instantly get a relaxed holiday feeling. The room’s interior is kept to a minimum. The influence and style of Piet Boon are noticeable through the blue chairs, the lamps, and the seating on the balcony.

Blueness opened its doors in August and it offers Japanese-oriented food while using local products from Zeeland as much as possible. You definitely don’t get the feeling of being in a small seaside town like Cadzand as Blueness would not be out of place in any city around the world. A striking feature is the long bar area, as well as the Wildspirit chairs which were specially designed for Sergio Herman. The Blueness concept is all about shared dining, so your table will soon be filled with delectable dishes such as oysters from Zeeland, langoustines, and Wagyu beef.

Restaurant PureC, an established name by now, is also part of the Strandhotel.The restaurant opened in 2010, has a Michelin star and is ranked in the list of the world’s top-quality restaurants year after year. The kitchen is in the capable hands of Chef Syrco Bakker who knows how to spoil his guests with a five or seven-course dinner. We start off with a glass of Pét Nat, a naturally sparkling and wonderfully fresh wine. The seven courses are all mouthwatering, with the langoustines and the amuse of halibut with goat’s cheese and pistachio being my personal highlights. The Indonesian Treasures was also especially delicious. Syrco Bakker has an Indonesian background and this dish is his view on the Indonesian cuisine. What a feast.

As it is December, the sun has set when we sit down at our table at seven p.m., but in summer you would enjoy seeing the sun going down on the horizon. This would be the only moment the guests would be looking around instead of at what’s placed in front of them. This is a bit of a shame as, apart from the gorgeous surrounding nature, the team realized some beautiful design collaborations again. The wall has been decorated with tapestries created by Mae Engelgeer, we see the mirrors by Sabine Marcelis hanging in the recesses, and opposite the wine cellar, Carine Boxy decorated a seating area with her splendid carpets and rugs. Even so, the interior of Pure C will be getting a makeover again in 2019.

The icing on the design cake

Herman also likes to collaborate with Studio Job, responsible for the windows in Herman’s restaurant The Jane. Pure C makes the birthday cakes the guests are offered when they celebrate their birthday (two people this evening). Stunningly decorated with the recognizable skulls. The guest only needs to lift up the cake to find a scrumptious dessert.

Breakfast is served in Pine House, the hotel’s light and airy brasserie. The breakfast buffet is extensive and, again, includes many products from Zeeland. From the typical local pastry called a ‘Zeeuwse bolus’ to locally produced apple juice. Or you can try Sergio Herman’s signature granolas.

Needless to say that Cadzand has become a true culinary destination, but it is one that combines food with nature. In particular when you have the beach right on your doorstep. It offers endless walking and is perfect to get some fresh air in between the culinary delights.

Located in the Cadzand marina at a five minutes’ walk from the Strandhotel, you will find AIRRepublic, an elevated brasserie surrounded by glass fronts. Here, nature and the elements are all around you – whether it is a dim and windy day in December or a sunny summer’s day. It offers à la carte lunch and dinner, and the pizza with sardines I had here was so delicious that I definitely recommend it to everyone. The interior has a more easygoing atmosphere and shows its connection with the sea. It has a surfboard hanging on the wall, next to a table created out of waste wood by Piet Hein Eek.

In short: Cadzand is the perfect place to combine your love for high-quality gastronomy with nature. And don’t rush it. Try to book at least two nights so you can try each restaurant at your pace. Have some time left over for a walk on the beach or to visit the Zwin nature reserve. The Belgian seaside resort of Knokke is only a short drive away as well and could be another nice excursion.

A weekend on the Belgian coast

A weekend on the Belgian coast