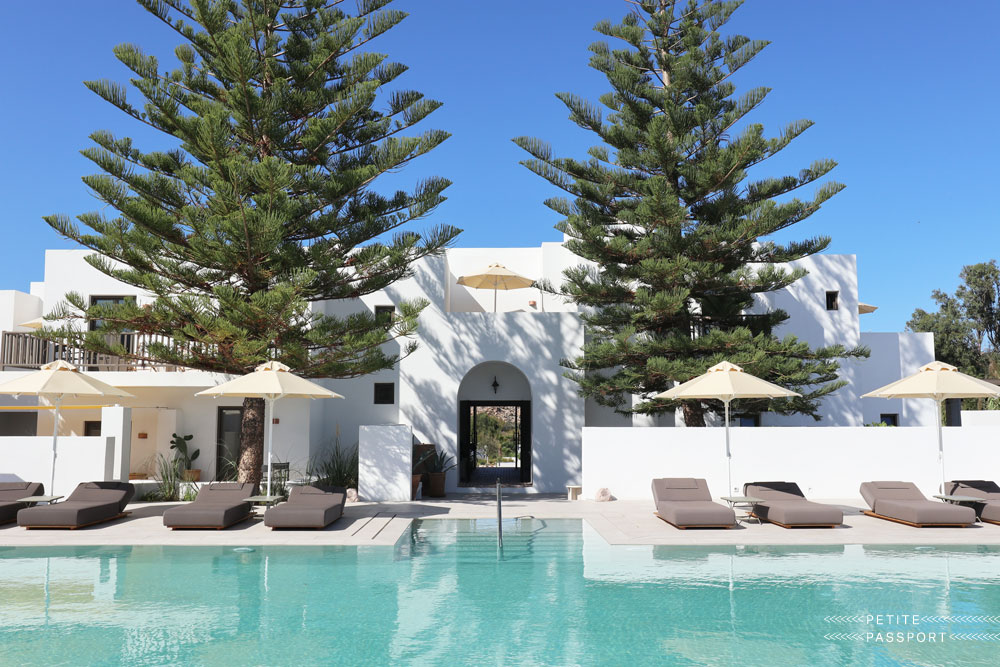 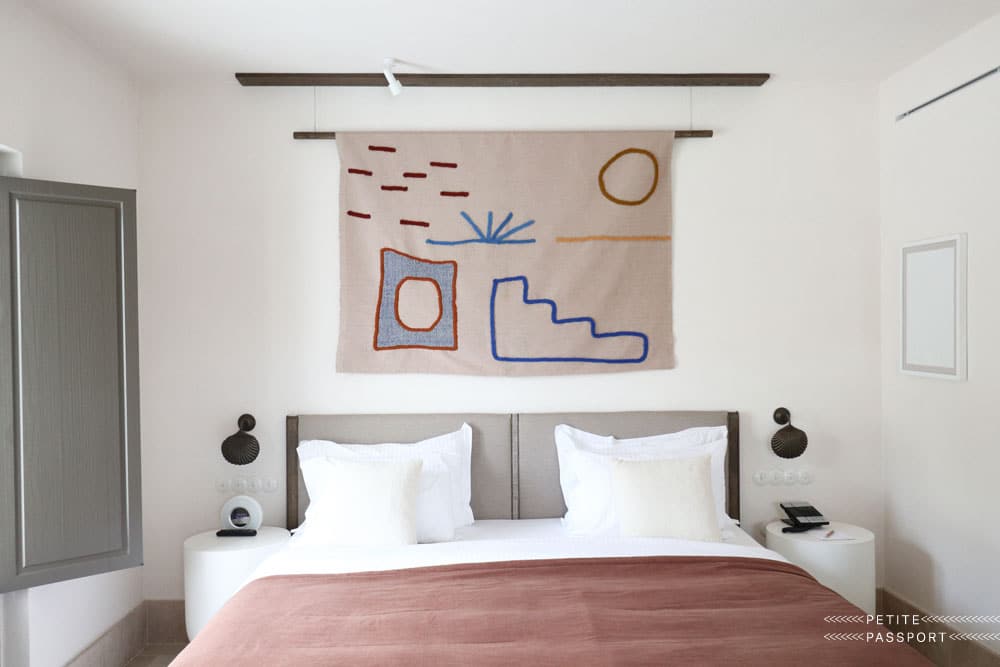 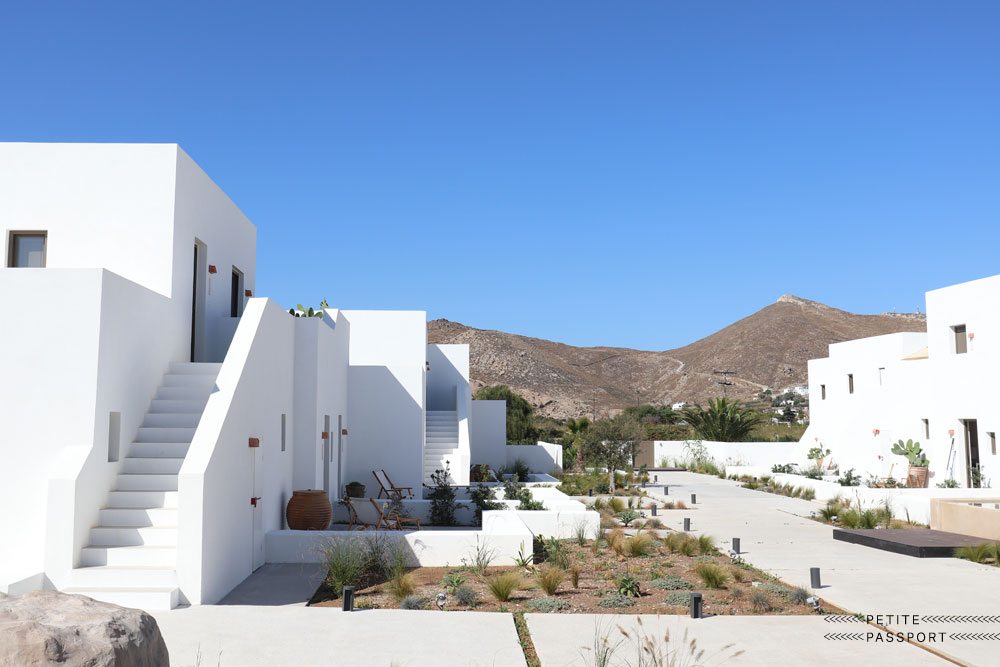 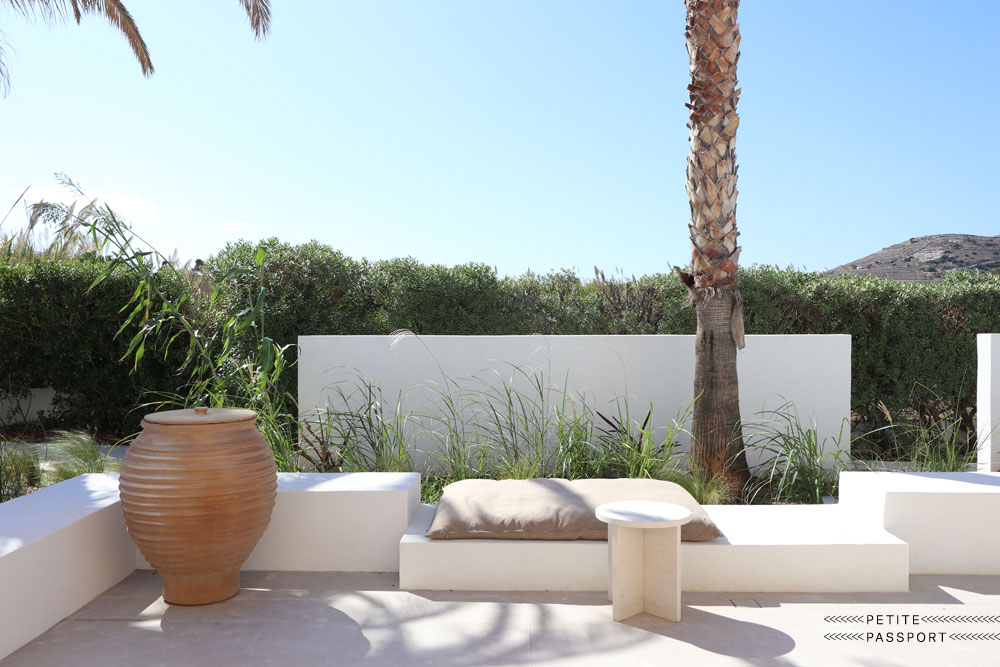 Three months ago Parilio opened its doors in Paros, a magical destination for those who want to be spoiled in every way possible.

Owners Kalia and Antonis Eliopoulos are from Athens and are also behind Vedema Resort and Mystique Hotel in Santorini, both members of The Luxury Collection by Marriott. Last year they opened Istoria, an amazing design hotel in former horse stables. When the couple went to Paros for a holiday, they fell in love with the island and decided to open a hotel here too. Small-scale, luxurious and especially for people who want to enjoy the tranquility of Paros – although the island also has plenty of restaurants and bars to offer.

The most important starting point for creating Parilio – the design was done by Stamos Hondrodimos of ID Laboratorium, who also worked on Istoria and the Mystique Hotel – was the connection with the nature surrounding the hotel. So there are huge rocks in the swimming pool, which are connected to the mountains in the distance. If you look through the lobby from the swimming pool you’ll see the mountains on the other side. And the large windows in the restaurant also bring nature inside. It makes you feel small as a person, being surrounded by centuries old mountains and nature.

The name of the hotel also has a connection with nature. Aristotle said: ‘Two Parelia rise with the sun and follow him all day until the sunset.’ Parilio is the optical illusion that arises around the sun. As if there is still some sort of annular aura around it. Parilio is also a combination of Paros and Ilios, the Greek word for sun. Also note the logo, based on The Fat Lady of Saliagos, a symbol of feminine beauty and an ode to the soul and light of the Aegan Sea.

True indulgence is if someone’s doing something kind to you if you don’t expect it. They invented the art of spoiling their guests here. If you lie down by the pool, you immediately get a glass of water. When you have to get up early for a flight, they will prepare a breakfast bag for you. If you want to book a massage and you say yes to a male masseur because there isn’t a female masseur available, but they see in your eyes that you rather be in the hands of a woman, they arrange it immediately for you (and that was a good choice: do book their Signature Massage, because it will leave you feeling as if you lost 10 kilos and you’re floating back to your room).

There are four different suites – which mainly differ in size, although you have your own swimming pool in the Sun Suite and a private Jacuzzi in the Uranus Suite. I stay in the Aurora Suite, the simplest category, although it feels very luxurious. Lots of space, a well stocked minibar, Korres products in the shower and a spacious terrace. But I fall for all the nice details. Lrnce’s beautiful tapestry hangs above the bed, there’s a very comfortable chair next to the bed and the mattress feels like a cloud. Personally, I like to sleep in rooms as dark as possible. You can close all the shutters here, so you will enjoy a deep and very comfortable rest.

From Paris to Paros

Then there is the restaurant called Mr E, named after the owner of the hotel. The restaurant is run by chef Alexandros Tsiotinis who also worked at Le Bristol in Paris. On the menu you will find authentic Greek dishes, but then presented in a more modern way. I mainly focused on the desserts, and the Crème Brulee is really delicious. Just like the Lemon Tart, by the way. And the risotto. And the Pastrami sandwich.

If you want to do more than relaxing by the pool? Then you can take a shuttle bus to Naoussa, a lovely village with white streets and a lot of bougainvillea. Or you can walk to the beach. There’s a beach on a five minute walk from the hotel, but the island has 40 beaches so you’ll have something to choose from. Also don’t miss the sunset. You’ll have the best views in Parikia.

From 200 euros per night, pariliohotelparos.com