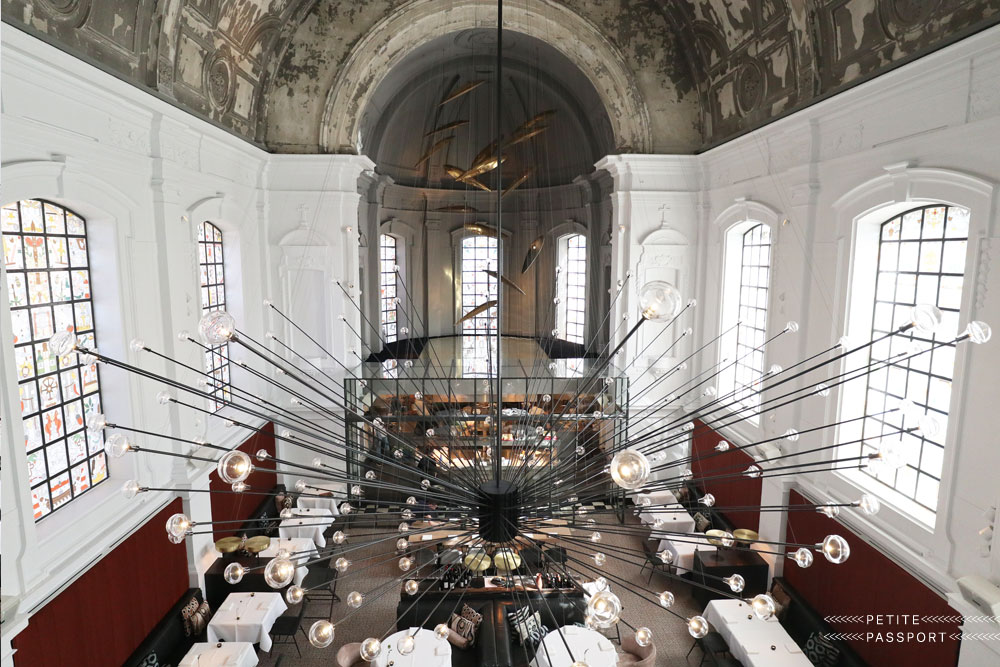 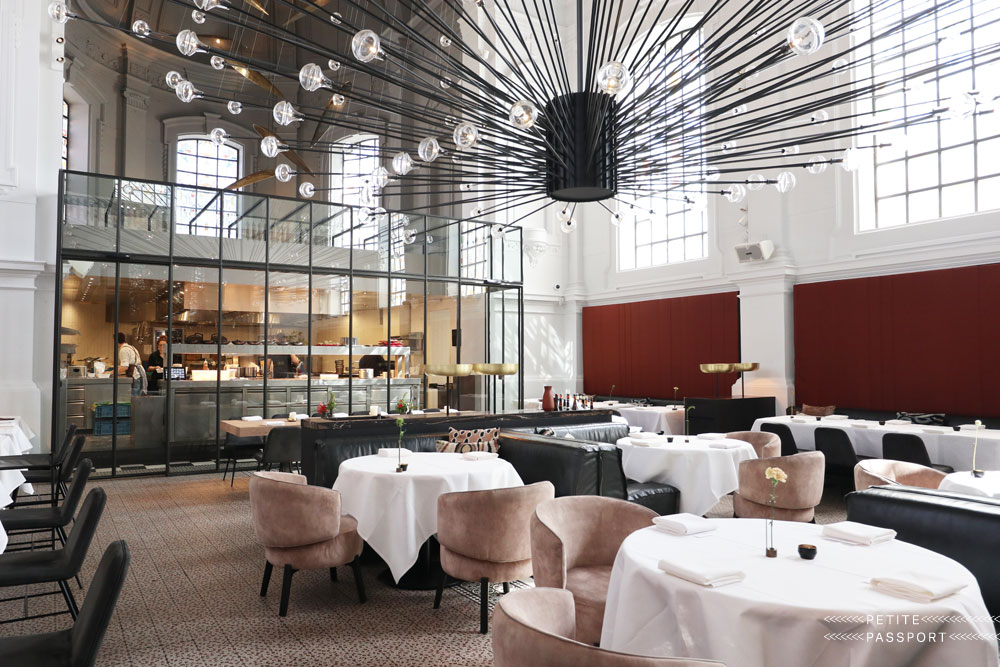 In the five years The Jane is open they were rewarded with two Michelin stars and as Most Beautiful Restaurant in the World. They’ve changed the interior together with Piet Boon. The artwork of the skull made place for an installation of fourteen sharks by Dieter vander Velpen and DIM Atelier. And the color palette changed so it would match the design of the windows by Studio Job.

I’ve had a delicious four-course lunch at The Upper Room Bar with a view over the restaurant below, the beautiful lamp by .PS Lab and the new artwork. I’ve tried the langoustine Asian style, the lobster risotto and, my favorite, the chu-torro with sushi rice and shiitake. As a dessert, I had the plums with rice-ice and basil.

Chef Nick Bril opened a new restaurant inside the newly opened August across the street. The Jane is a high-end gastronomical experience, The Upper Room Bar lets you try out smaller dishes around the open bar so you can see the chefs preparing your food and at August you can expect a delicious three-course bistro style menu.

All the pictures are from the new interior/atmosphere.

Tomorrow The Jane in Antwerp will open its doors: the new restaurant of Sergio Herman and Nick Bril. When they announced in February you could book a table, the line was almost immediately flat. Within a few hours, they listed more than a thousand (!) tables as reserved. Of course, everyone wonders what Sergio Herman and Nick Bril have in mind with The Jane, because Oud Sluis, with three Michelin stars, was obviously a huge success. In December they closed the doors for good and tomorrow almost the entire team continues working with the same passion for The Jane.

Its striking feature is that it’s a complete concept. It is not only about the amazing dishes, and believe me, during the seven-course tasting menu I went from one taste sensation to the other, but really everything you can think of is carried out in detail. I like to tell you what caught my eye, but I think that, just as you see something different in the windows designed by Studio Job every time you look at them, there’s far more to discover.

Let’s start with the location. The restaurant is housed in a former chapel of a military hospital in Antwerp and designer Piet Boon has decided to keep that feature visible. Even play with it. Where the priest kept his divine service, the team is now cooking and by doing that they now have the task to inspire their guests in a heavenly way. The welcome is warm and the reception space is kept minimalistic until you walk around the corner and you get the definition of a jaw-dropping experience. I had seen pictures on the internet (follow @sergioherman on Instagram), but as you can’t describe to your family how beautiful the sunset in Darwin is, so striking is this interior. And I am thinking that’s because of ‘The Lamp’. It’s not a normal lamp (a design by .PS Lab from Beirut), no it’s a huge lamp. A statue. It had to be divided in two to transfer it from Beirut to Antwerp. One part came by airplane, the other one by boat. And it was even stuck at the port of Antwerp for a few weeks. Look at it when you get there and wonder how they placed it and put it together. That must have been quite a job.

Don’t forget to visit the bar/restaurant upstairs (The Upper Room Bar) too because you will have a magnificent view of the lamp there too. And you can get up close & personal with the windows created by Studio Job and see them even better from here. Since I didn’t drink alcohol because I had to drive, I asked for an alternative: they made a drink upstairs and brought it down to the table. It was presented on a bed of hay which they had to light to give the drink an earthy flavor. Very special!

The bartenders and the rest of the staff look very fashionable wearing aprons from G-Star, especially designed for The Jane. Cool and definitely not stiff. The bartender said: ‘If I want I can go out in the center of Antwerp in this clothes.’ He’s right.

If we look to the other side we see a skull above the kitchen. A great work of art of Walter vanHaertens Art Collection in Brussels. The name of the artist is Kendell Geers, an artist from South Africa.

Now it was time for us to go to our table. But before I sat down I saw a long wooden table with beautiful candleholders on it and I watched the chefs creating their, may I say, art on plates? They all are dressed in their G-star outfits and they work in a beautiful transparant glass structure in the most heavenly place in the chapel. The first dish comes in tableware that immediately got my attention: designed by Galia Tammuz from Tel Aviv. A sort of dimpled vases who look like pieces of art, let alone that you’re eating out of them. After that we ate out of heavy ceramic plates from Tel Aviv too. You may recognize the small plates for your bread from Oud Sluis. A design by Studio Job. The last dish was my favorite: Vika. A dessert that Nick Bril created especially for his newborn daughter and which holds bright pink macarons.

I’m probably forgetting something (the Aesop handwash in the toilets, the knives of Tomer Botner from Tel Aviv, that heavenly dove that I have tried), but I can not reveal too much ofcourse: grab that phone, book a table (a few months in advance) and let yourself get inspired by an overwhelming explosion of gastronomy, art and design. I say: Amen!

The Lille Bakery of Antwerp

The Lille Bakery of Antwerp

Store, restaurant and apartment under one roof

Store, restaurant and apartment under one roof