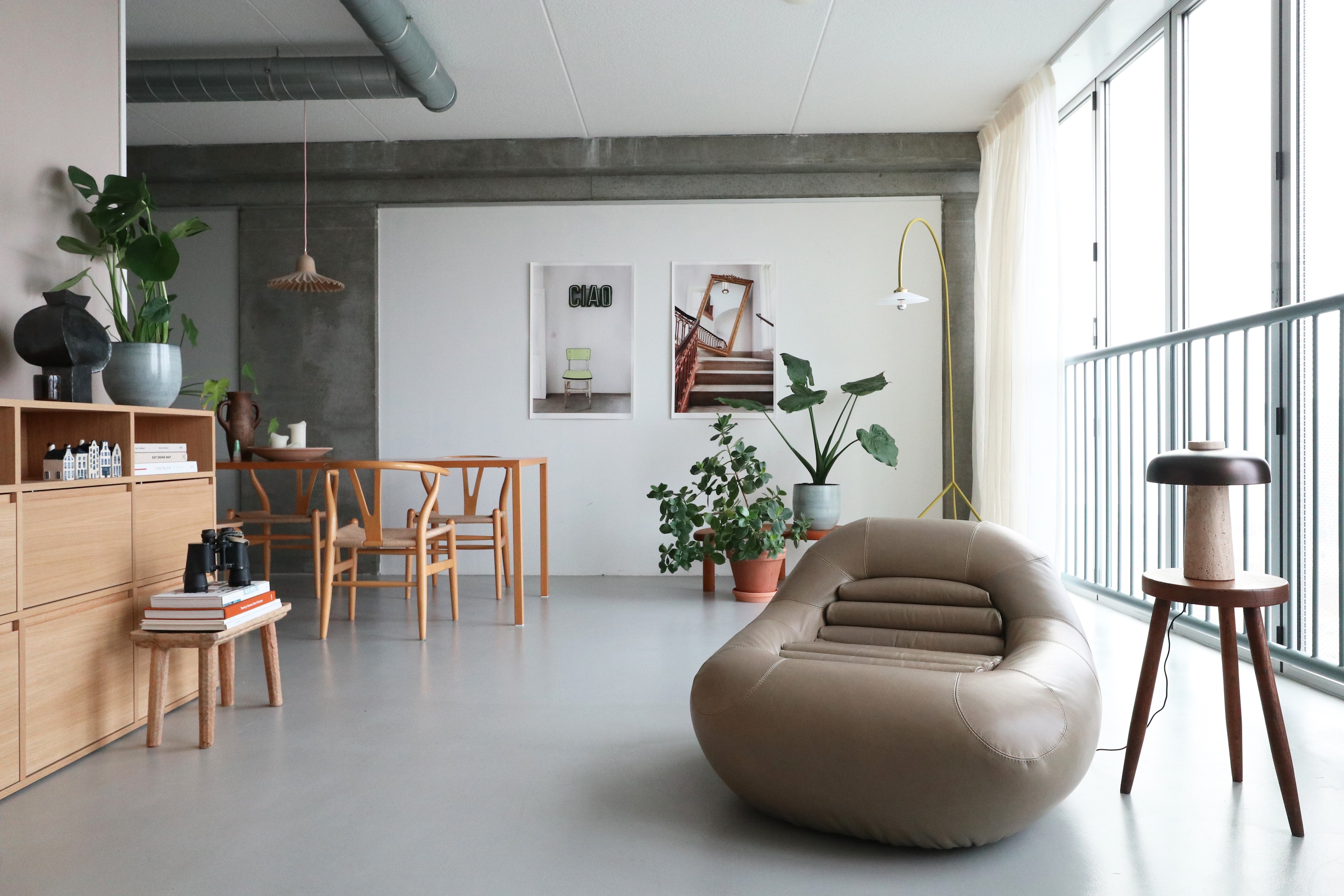 Ever wondered what it’s like to live in a house where all of the inspiration Pauline Egge of Petite Passport gathers during her travels comes together? Let’s check in at this Rotterdam-based loft on the sixth floor of a former power station overlooking the river Maas.

Bringing the platform’s aesthetics to life

During the pandemic Pauline Egge got the idea of bringing the platform’s aesthetics to life in her own home. She made her first steps towards The Travelling Home, a place that will be home to designers, brands and artists whose work she admires since the first time she lay eyes on them in one of the restaurants, shops and hotels she visits for Petite Passport.

As the view is magnificent, but also very much present, the interior is kept as minimalistic as possible: “As I’m travelling often my mind tends to go in overdrive by all the inspiration, so when I return home, I like to arrive in an environment without much distractions. This is the place where I calm down, meditate, look out over the river, read books and write the guides.”

She already worked closely with design partners to turn her ideas into reality: “I really want to create a space as if you’re stepping inside the pages of Petite Passport. That’s why I first turned to the designers whose work I really love such as Belgian designers Muller Van Severen, Dutch linen brand ByMolle, Danish design brands Muuto and Menu and successful modular shelf company Tylko. As I live in Rotterdam, I also like to support local shops such as Pantoufle and Fundamente.” 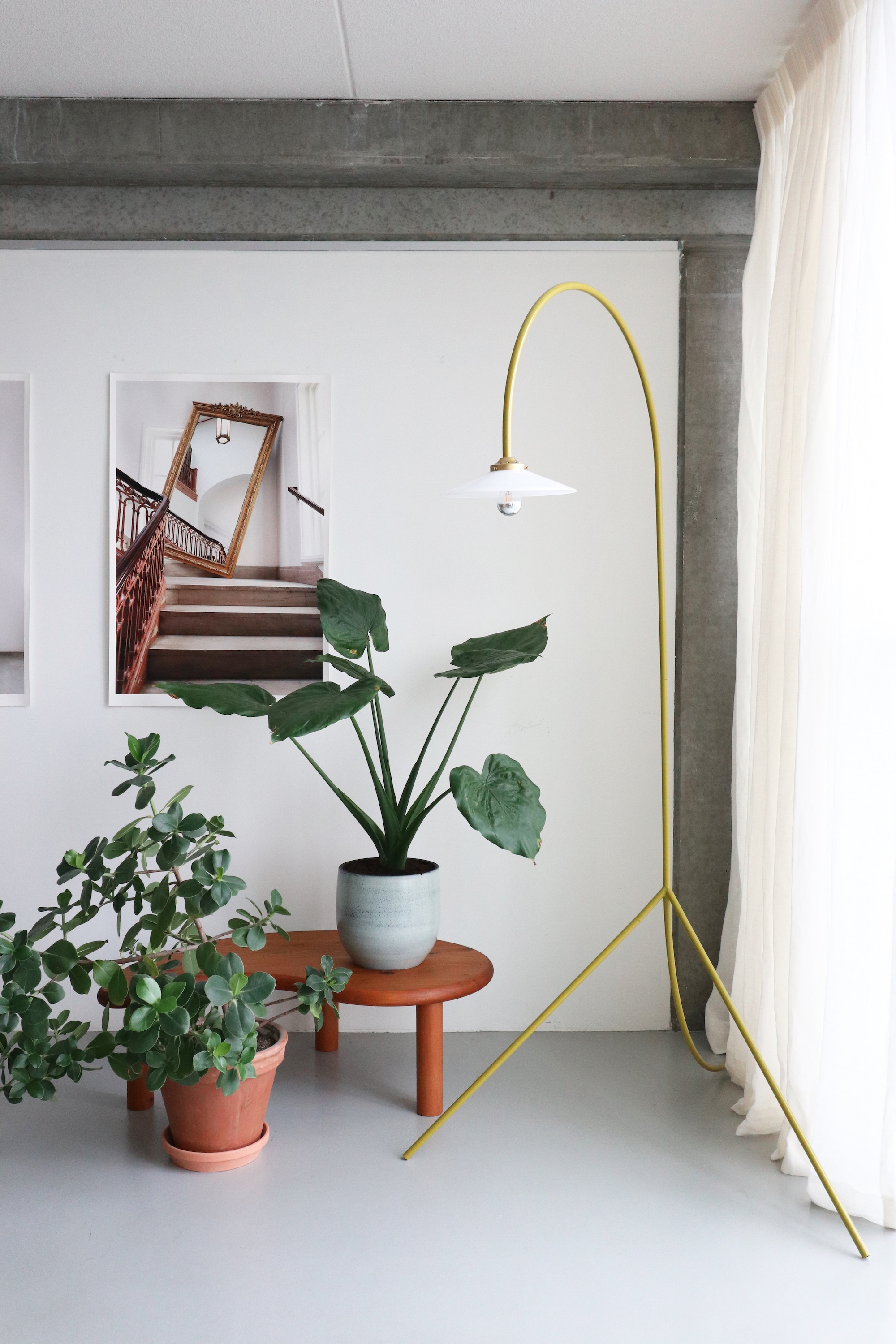 All over the world you will find Muller Van Severen for valerie_objects lamps in the most beautiful spots, such as this concept store in Copenhagen, this coffee bar in Amsterdam and this restaurant in Berlin. This is the Standing Lamp in curry color. The freeform coffee table is from Fundamente in Rotterdam. The curtains are by ByMolle. And one of the plants I’ve adopted from my neighbors, the other one was bought in a plant store in Rotterdam. The prints are Pauline’s own (taken at The Line in Washington DC). 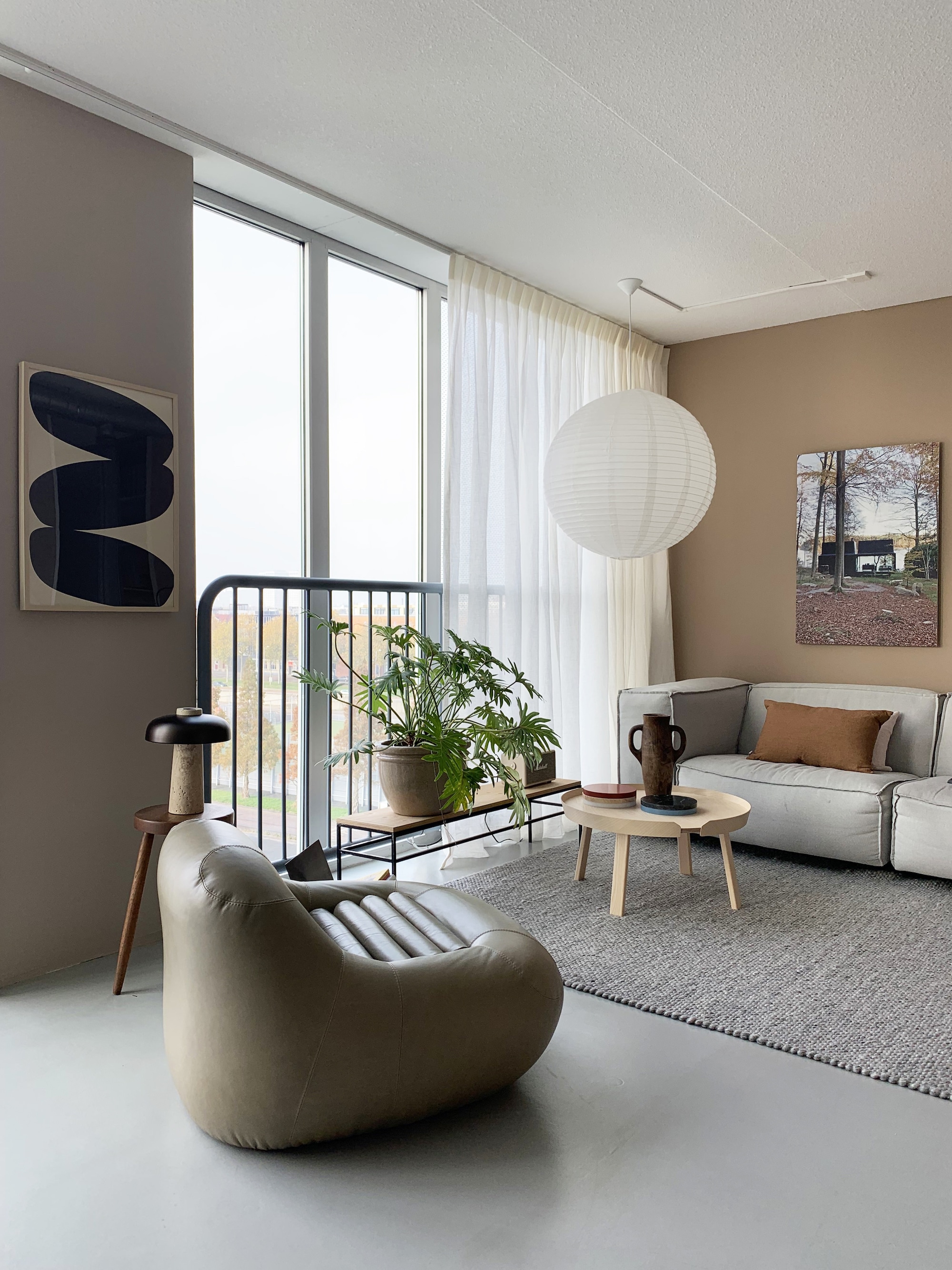 The living room with a view over the river Maas. The curtains (and pillows) are from ByMolle, a Dutch linen brand who also took care of the curtains in this new hotel in Rotterdam for example. The graphic print is made by Nina Bruun for Paper Collective. The other photo was taken by Pauline during a stay at the Vipp Shelter in 2017. The coffee table is a design by Muuto. The vase was made by Pauline’s grandmother. The plant is another adopted plant. And the rug was found at a Dutch hardware store (Karwei). 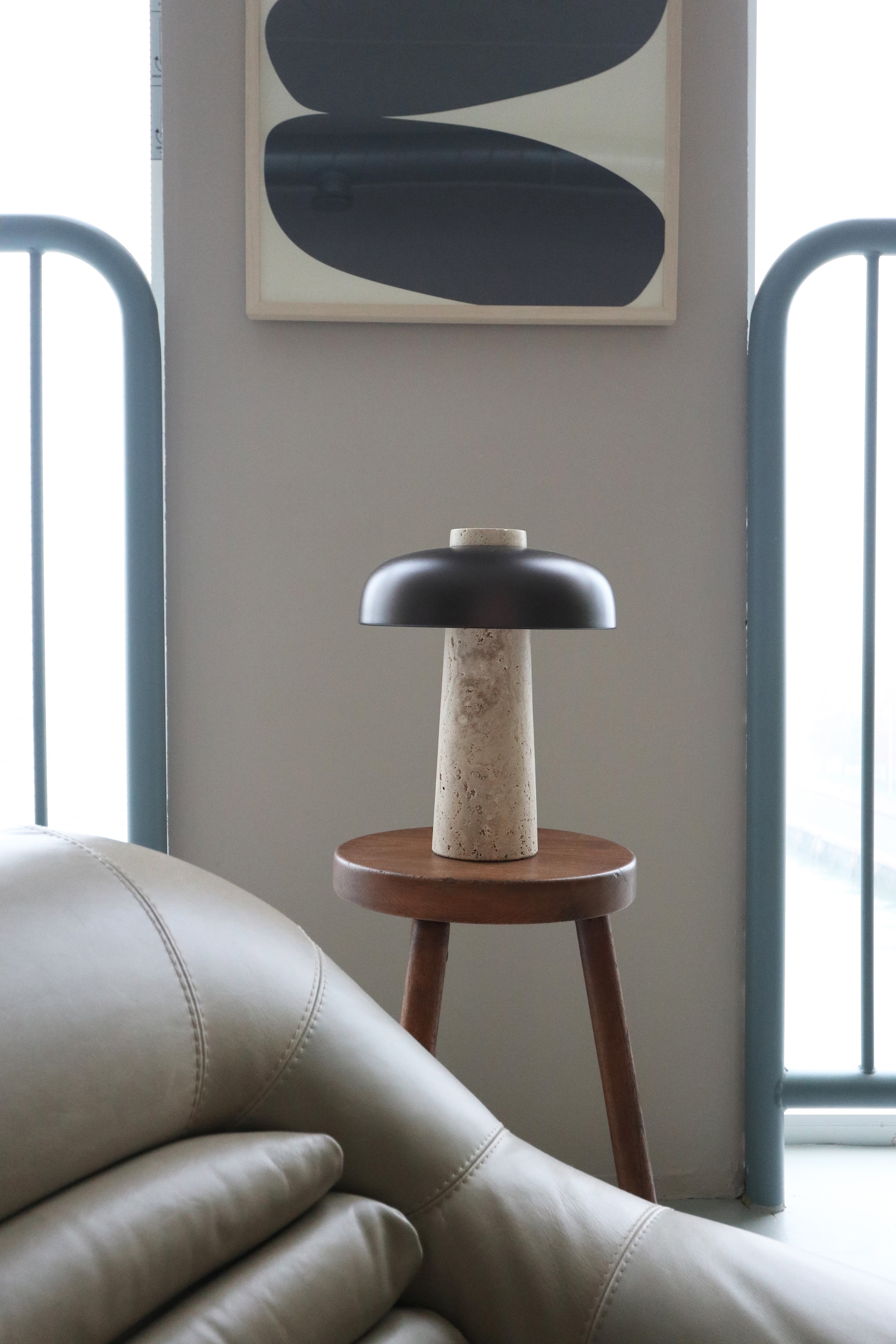 This lamp is such a beauty. Pauline fell in love with it when she launched the Petite Passport Magazine at The Audo in Copenhagen. It’s a design by Menu, made from travertine and there’s a dimmer on top of it. The lamp gives a very nice atmosphere to the room due to the warm (led) lighting. 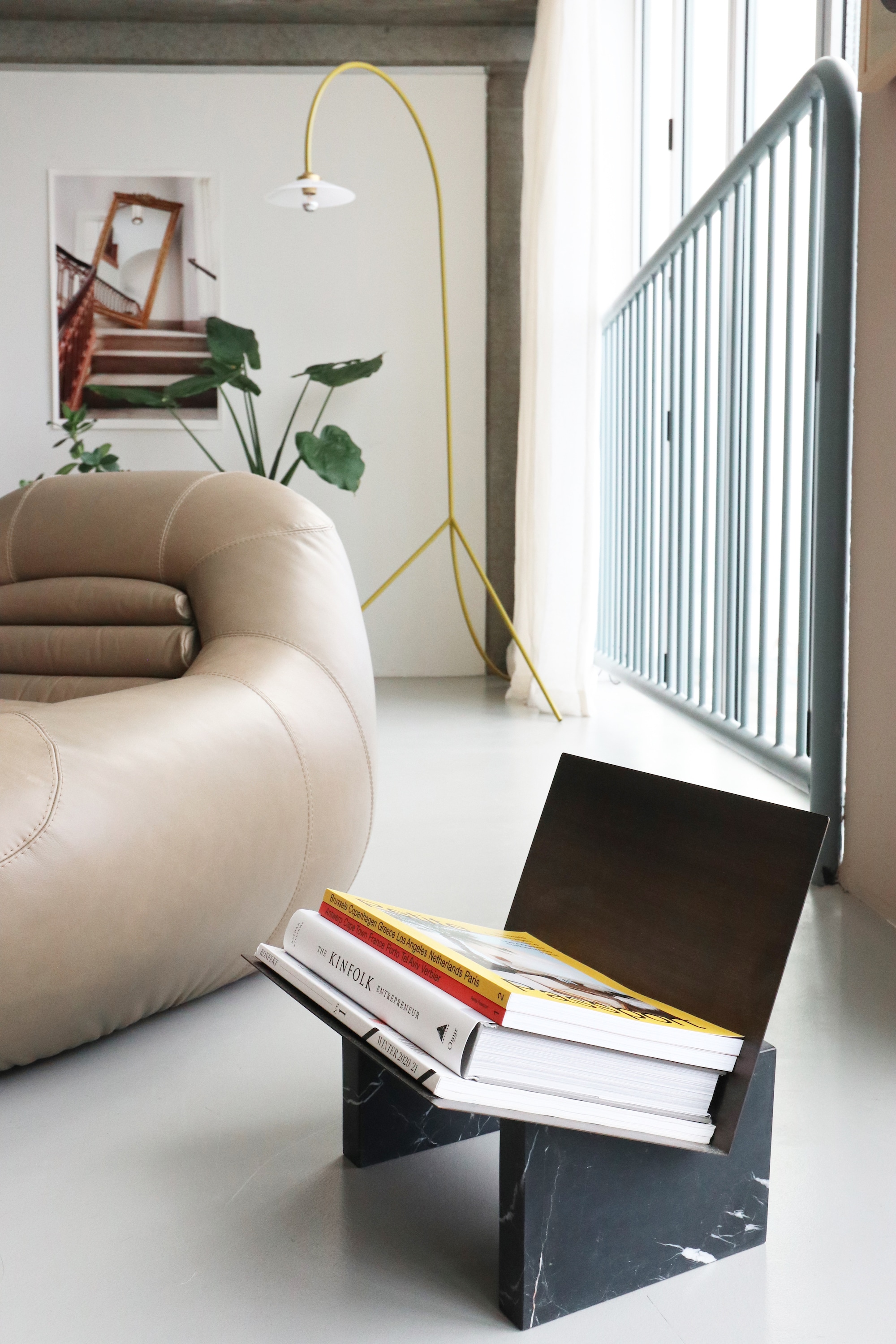 Another gem of Menu for magazine lovers. This magazine stand is a true piece of art. 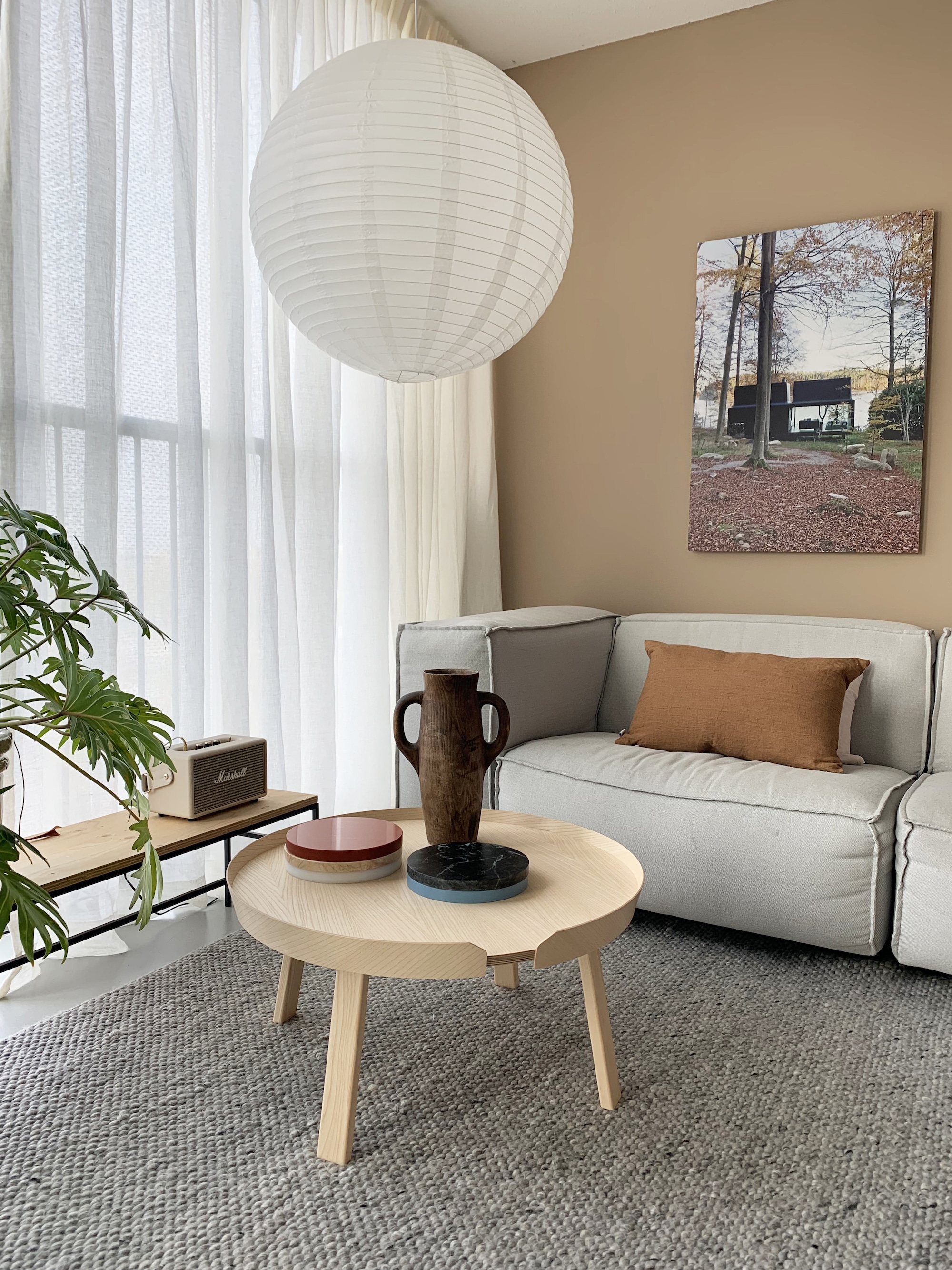 A close-up of the coffee table by Muuto. On top of it you’ll find the Five Circles by Muller Van Severen for valerie_objects  and a vase made by Pauline’s grandmother. Curtains and pillows by ByMolle. Print taken during a stay at the Vipp Shelter in Sweden. 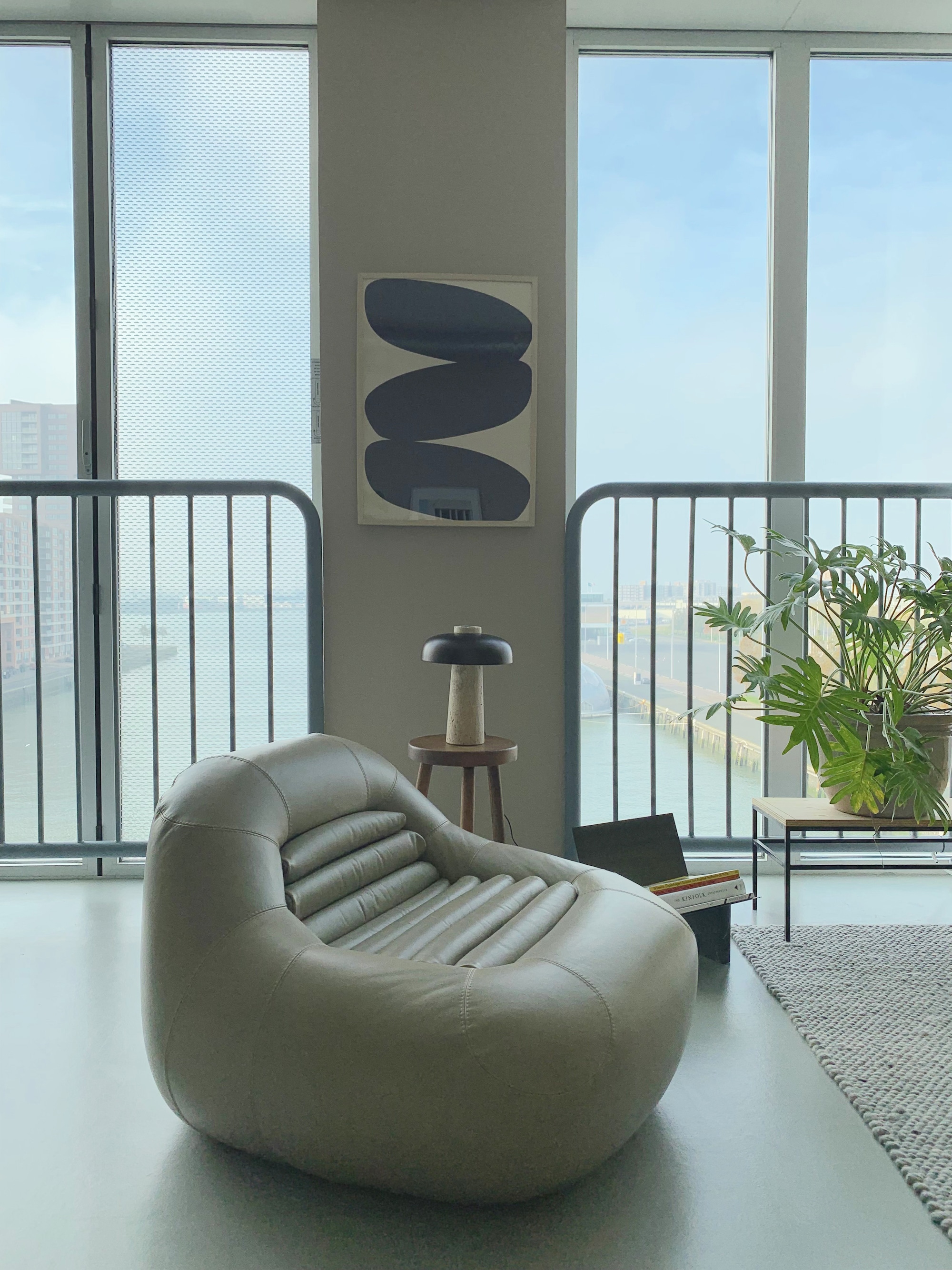 The chair is what keeps friends and family oh- and ah-ing. It’s an Italian design by De Pas, D’Urbino and Lomazzi from Fundamente in Rotterdam, an inspiring store selling 20th century design and objects all over the world. In the background you’ll see the view of the apartment. 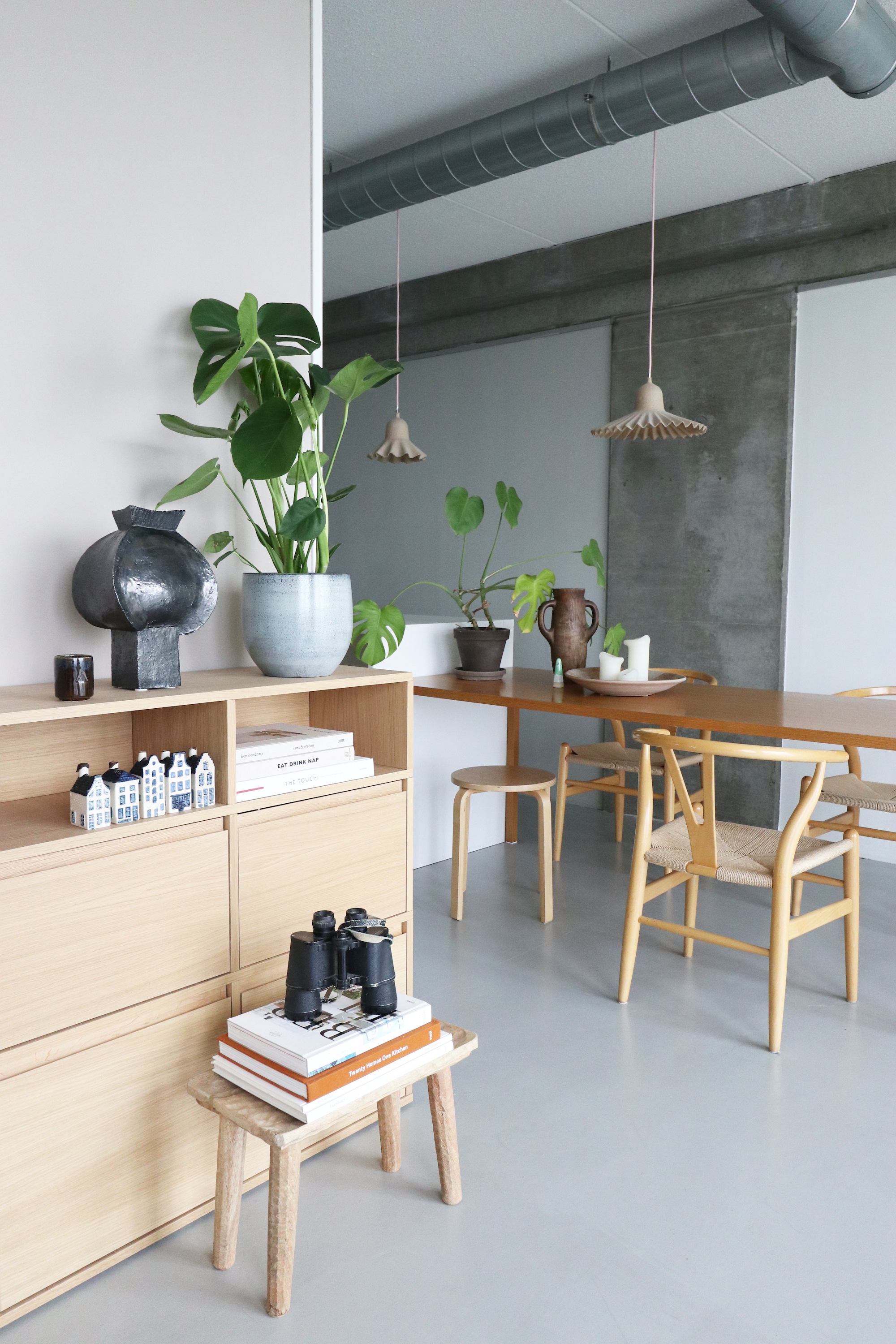 The custom-made Tylko cupboard is a true book saver. Pauline loves reading (and also houses full of books) but due to the amount of light she now keeps them behind doors. On the cupboard you see a vase by Fundamente, and next to it a scented candle by ByRedo for IKEA. The binoculars were used by Pauline’s grandfather. On the table (the whole set was bought in Barcelona where Pauline lived in 2014/2015) you see a Studio Arhoj ghost. 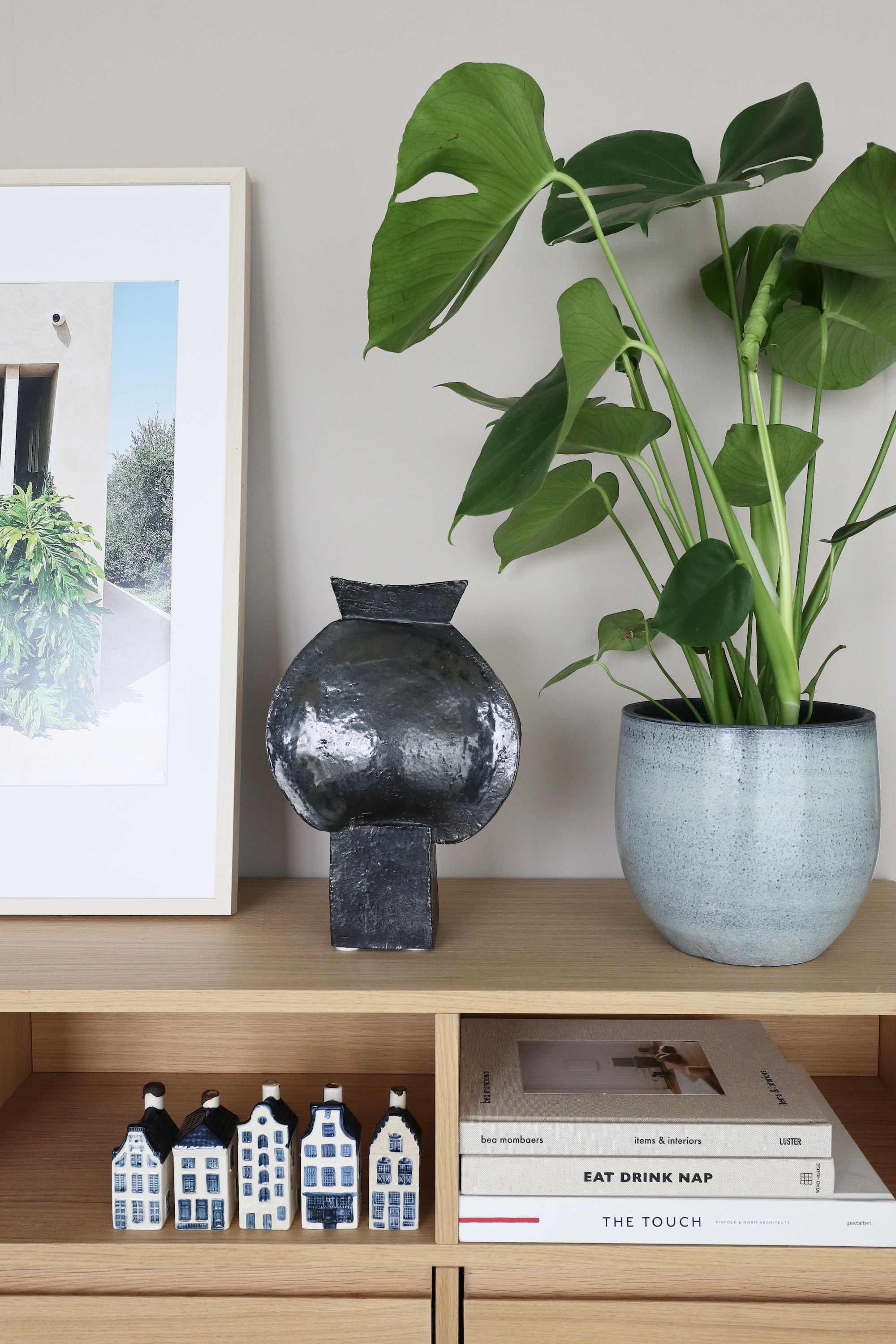 Another close-up of the Tylko cupboard. Love the small space under the top to gather some books or the KLM Business Class Delft Blue Houses. The vase is from Fundamente. 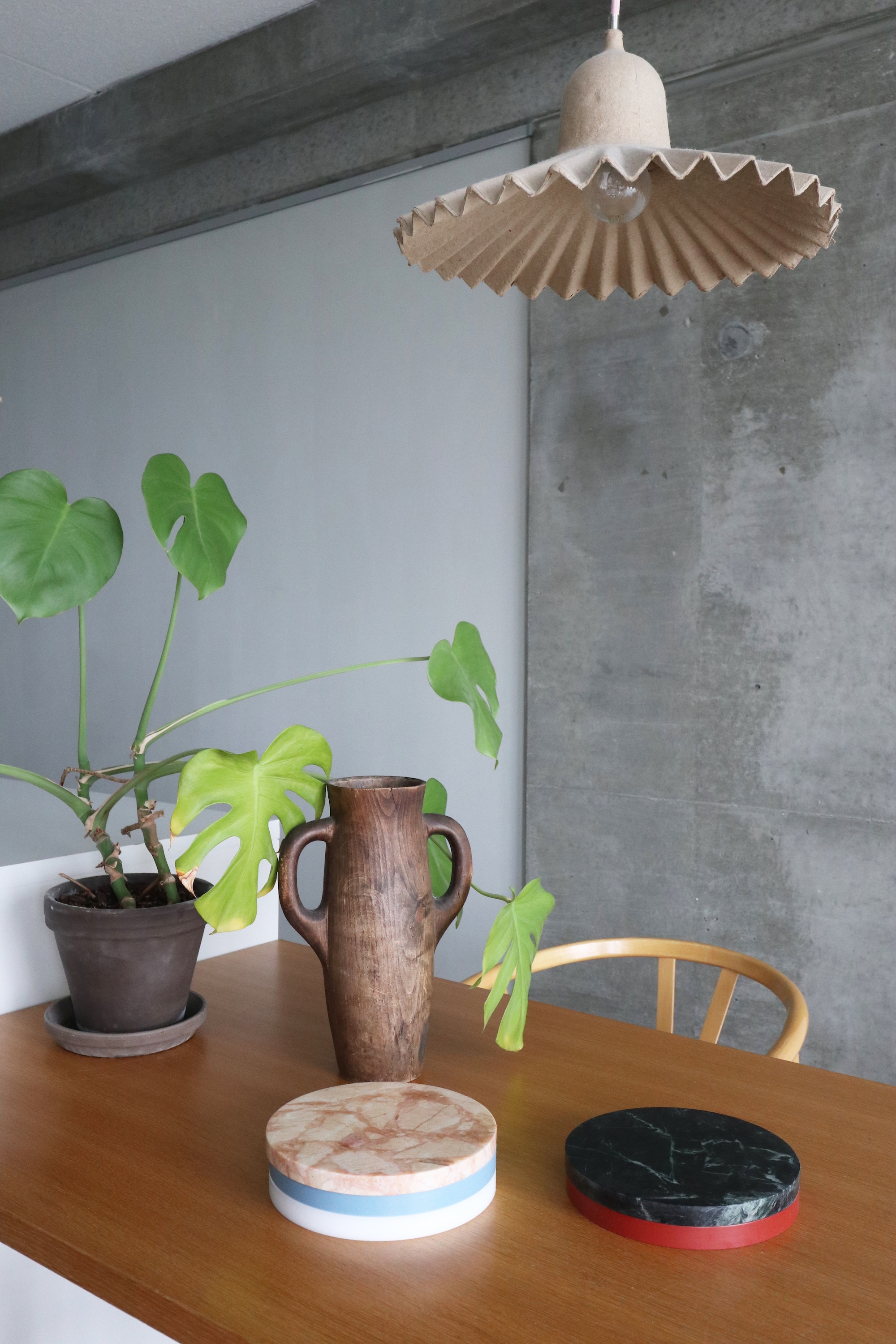 The Five Circles by Muller Van Severen for valerie_objects on the dining table.