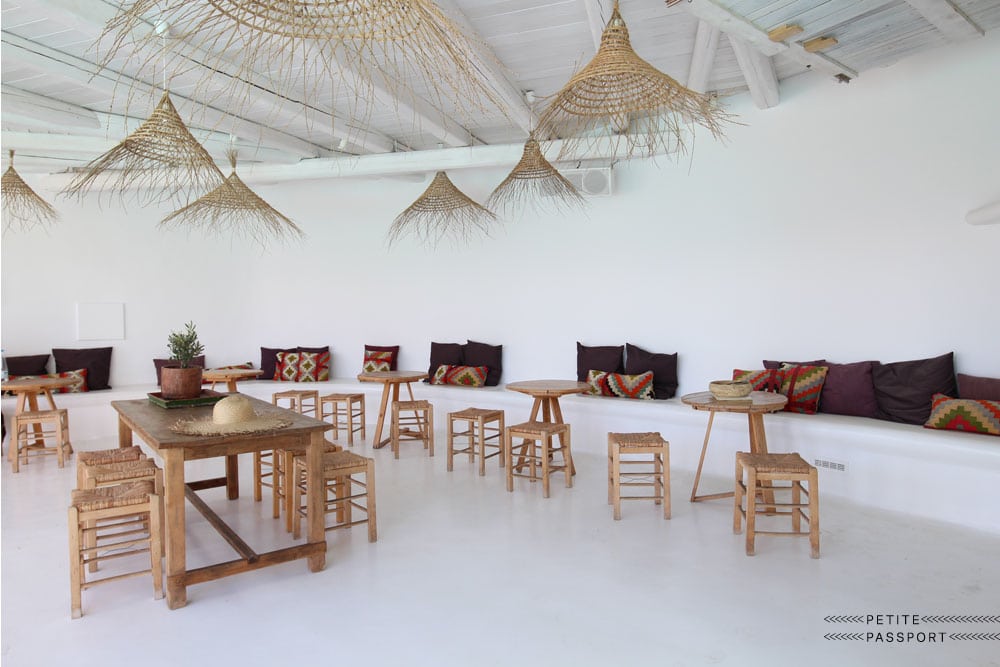 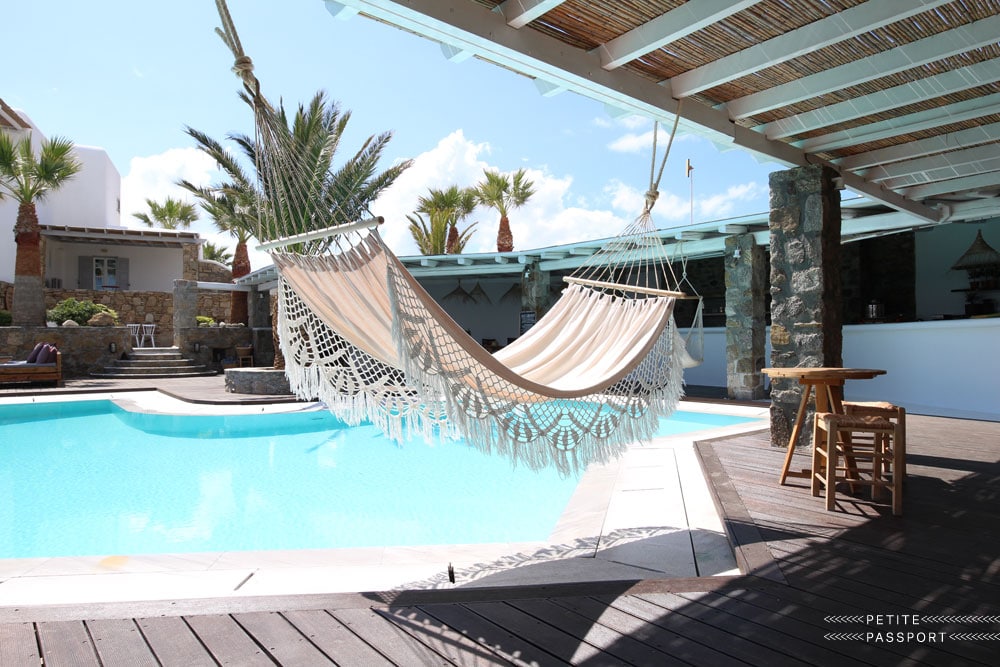 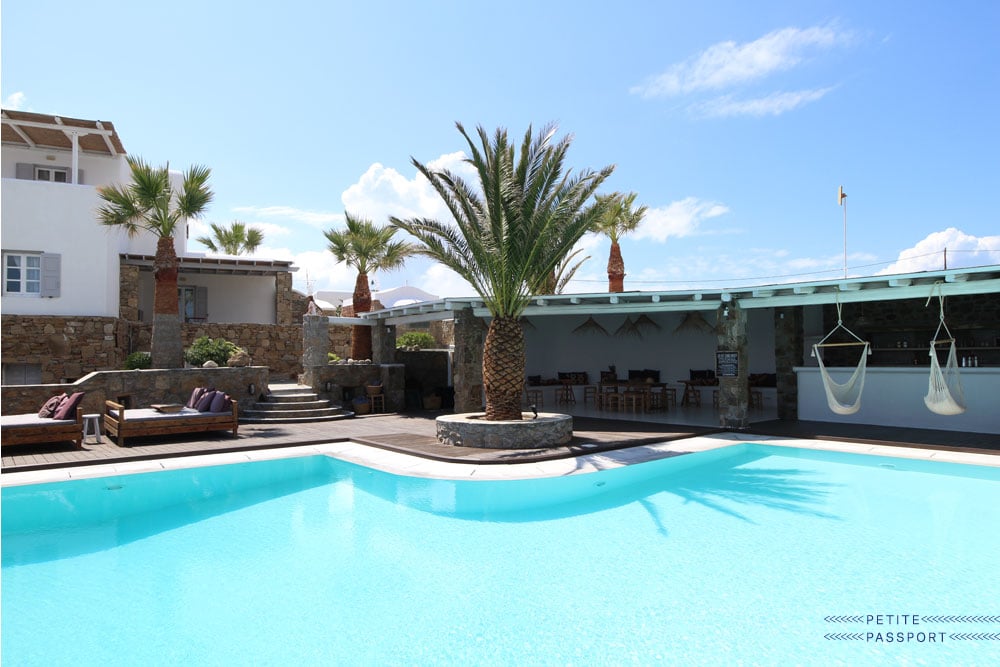 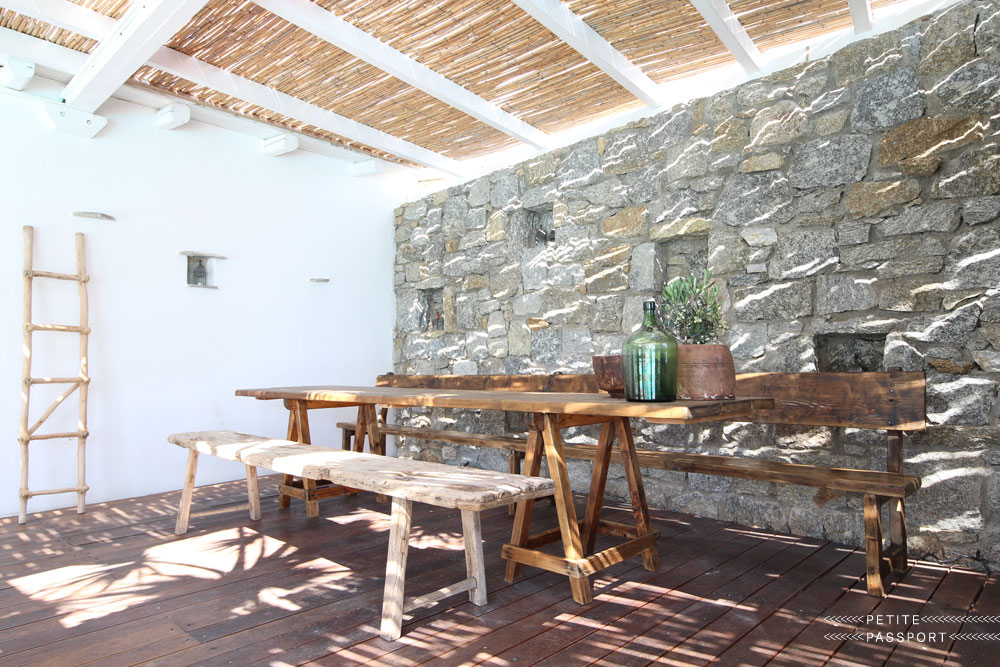 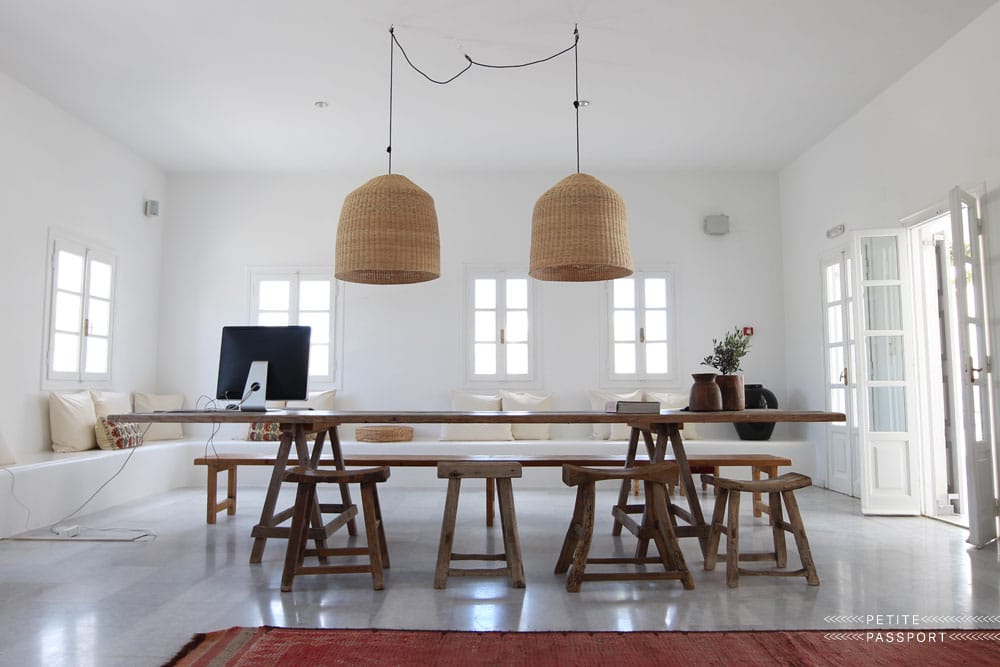 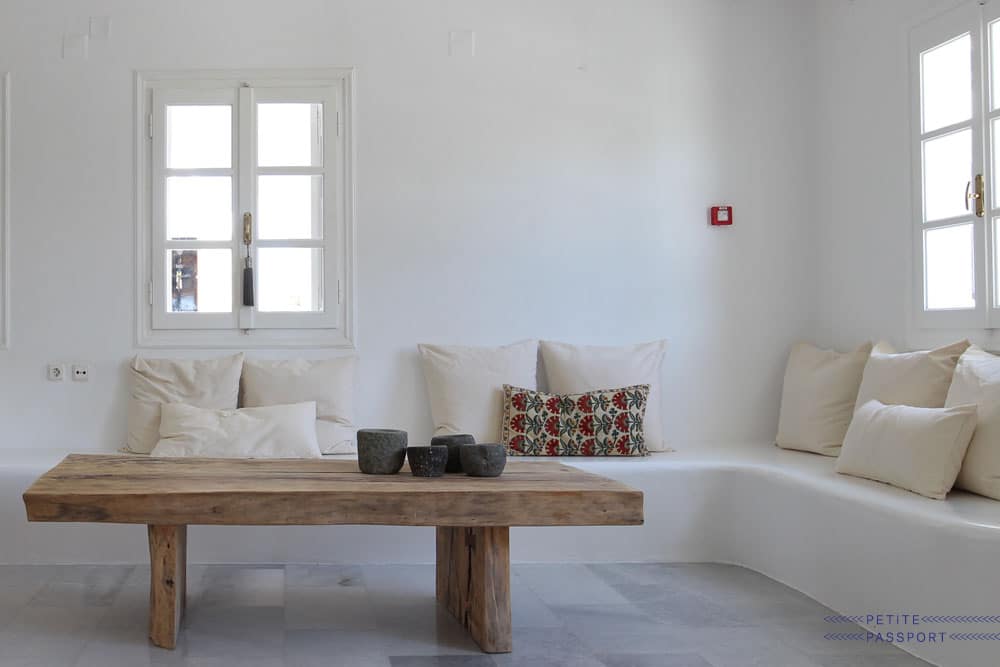 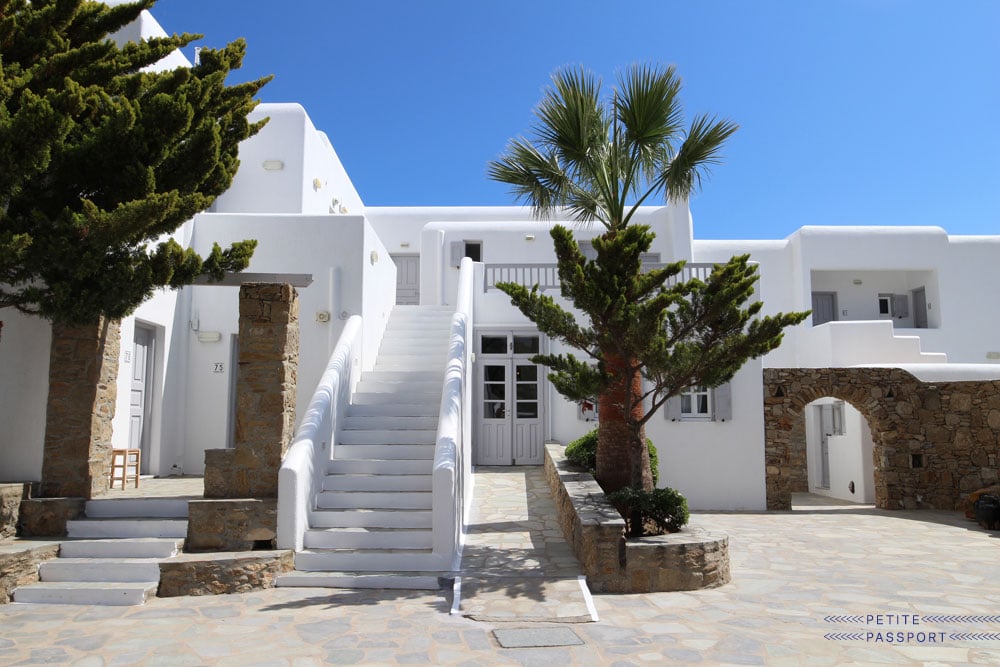 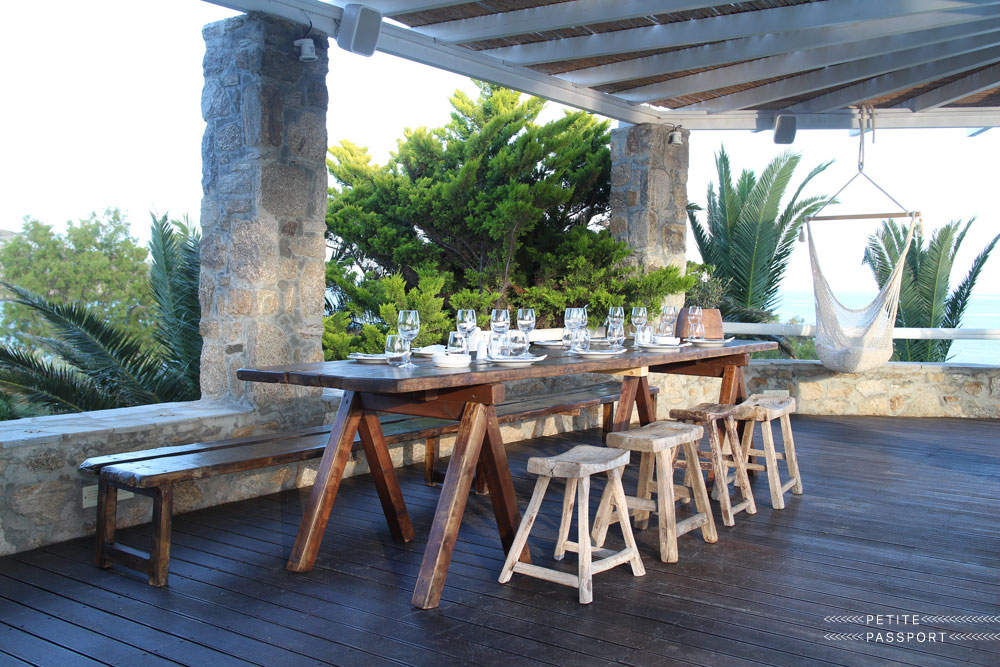 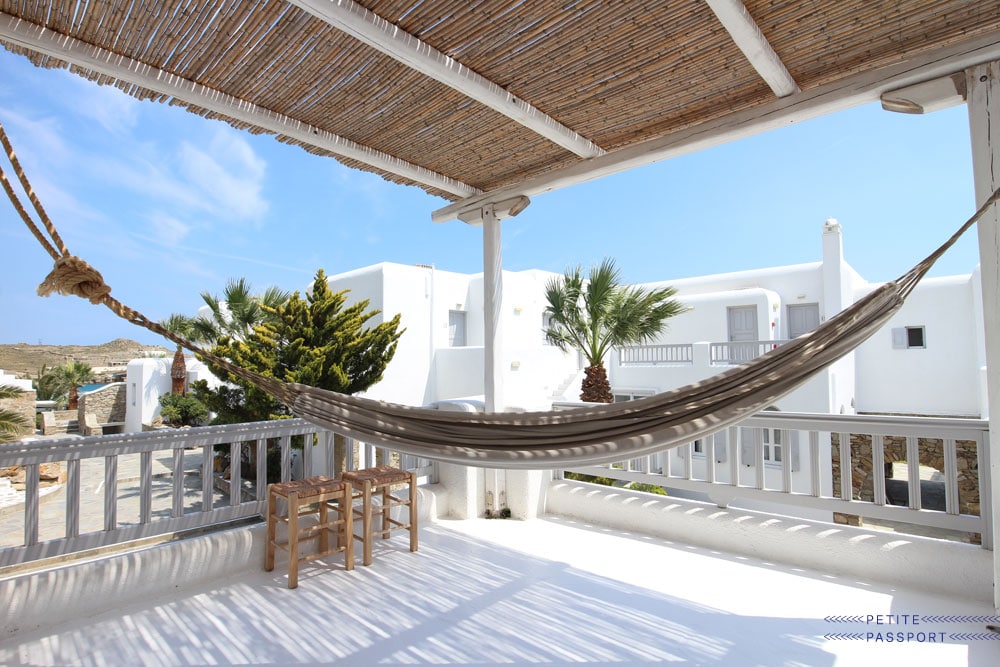 The stunning design and the great story behind it. The owners of the San Giorgio Hotel are known for their popular Paradise Club on the island. From near and far dance lovers and DJ’s come there to get the party started. Within walking distance of the club, there was the old San Giorgio Hotel but it was an old hotel where ‘four of us slept in a tiny basement room’, says Thomas, one of the managers. What if they could turn that hotel in a new one? In 2012 they finally got a ‘yes’ and they had three months (!) to build the hotel into the San Giorgio Hotel that it is today. ‘That’s crazy’, said good friend Claus Sendlinger, owner of designhotels.com, ‘why don’t you first make a pop-up hotel by designhotel.com of it? Then you will have time to make everything perfect for next season.’ And so it happened. Together with interior designer Michael Schickinger they transformed the hotel into a new luxury resort. As Thomas says: ‘that does not mean you have a marble shower and that you have to dress like penguins because the new luxury lies in the experience. It’s not a souvenir you take home with you but something you can look back on for years.’

Despite the hotel looks extremely beautiful they didn’t have a big budget. So all the beautiful wooden tables at the pool area were bought somewhere along the road near Athens for 400 euro. The floor in the bathroom by the pool comes from a villa from 1809. And the driftwood is now used as a hanging system in the rooms. If I ask for the biggest compliment Thomas has ever got is that people feel at home. ‘They say: normally I need to unwind for four or five days but I’ve only been here for 12 hours and I already feel relaxed.’

I can confirm this out of my experience. Of course, you need to get rid of the hustle and bustle of home before you end up in the island rhythm but the hotel and the team will help you to get into that holiday rhythm quite fast. While I’m busy working out my schedule for renting a car, they take everything out of my hands and make sure the car is delivered to the hotel the next morning. The room is beautiful (and smells really good) and the bed is so cozy under the mosquito net with the best pillows ever you never want to get out of it anymore.

The area around the pool is perfect to work on your tan or read some magazines or books and if you order something to eat, you know it’s good. Take their breakfast: delicious Greek yogurt with honey and fruit and pancakes with banana. And after that, you can also walk to the buffet for a freshly baked apple pie. But above all it’s one of the most inspiring hotels I’ve ever been to every corner is decorated beautifully and that’s why I couldn’t stop taking pictures. From the hammocks on the balconies to the cushions in the breakfast room. And from the bamboo chairs in the lobby to the tables at the pool. A true recommendation!

Update 2018: Since the hotel is located next to popular beach clubs it can be very noisy at night. I’ve stayed here off-season so there weren’t any parties going on at that time, but my readers pointed out that it can be very noisy. My advice would be: stay here off-season and check the party schedule beforehand. Or check-in if you love to party too.